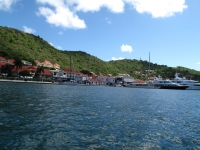 St. Barts home of Jimmy Buffets popular song Hamburgers In Paradise and his favorite bar of the same name has some of the most exotic shopping you will find anywhere. The provisioning is good and close to the dingy dock. Filling the water tanks is very cheap and customs is simple and we found friendly. The island itself was hard to settle it in the early days as the rainfall is insufficient to support agriculture. However, St. Barts has come a long way with the rich and famous building luxurious vacation homes. Its fine small harbor and marina along with several sheltered bays have made it a favorite with charter boaters. St Barts prospered under the French in the late 1600s when it was used as a base by pirates to spend their quickly-gained fortunes. Anse De Colombier is a favorite beach with marine life abounding in the bay. Snorkeling is magnificent with sea turtles, rays and many others underwater friends enjoying the anchorage along with the many boaters you will find here.

Tweet
More in this category: « St Maarten/St Martin Martinique »
back to top